Nick Piunti's Got a Lot of "Heart" 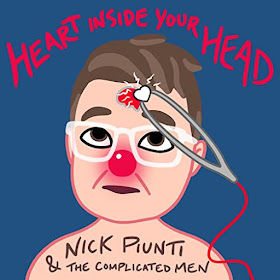 When I reviewed Nick Piunti & The Complicated Men’s 2020 release, Downtime, for the music blog CultureSonar, I indicated he just might be power pop’s best kept secret. I hope a whole new group of fans discovered Nick’s music after checking out that terrific album, because he and the band are back with a superb new record, Heart Inside Your Head. This fabulous disc is a must listen for fans of well-crafted, melodic rock and roll. Heart Inside Your Head is an outstanding collection of songs that will have strong appeal for fans of 1980s style pop, rock and roll and old school power pop.

Do you dig The Outfield, Dwight Twilley, Tom Petty, or Bryan Adams? You’ll hear echoes of these artists in Piunti’s splendid songs, which are hook-filled confections that will absolutely get stuck in your head. From the propulsive opening track “My Mind (Plays Tricks On Me)" to the guitar-propelled “Trying Too Hard,” and “One of The Boyz,” the tunes on Heart Inside Your Head are perfect examples of first-class pop/rock songwriting. In addition to the more rocking selections, the album also features some introspective ballads, including the superlative “Nothing New” and “Gloves Come Off” as well as one of my favorites, the lovely “Keys To Your Heart."

Piunti’s terrific lead vocals and guitar and synth work are backed up by the supremely-talented Complicated Men: Jeff Hupp on bass, Kevin Darnall on keyboards, Jeff Daksiewicz on guitar and Ron Vensko on drums and percussion. Piunti and the band are all longtime veterans of the Detroit rock and roll scene, and their top notch musical chops shine through on every track. Heart Inside Your Head was produced by Geoff Michael, along with Nick Piunti and the band, and their fine work behind the boards provides the album with that classic 1980s pop/rock sound, while also imbuing with a modern sensibility.

Heart Inside Your Head, which will be officially released by JEM Records on May 20th, is an exceptional record that deserves the attention of rock and roll and power pop fans everywhere. It’s fully evident from the unbridled enthusiasm displayed by the band on this disc that Nick Piunti & The Complicated Men enjoy playing together, and that joy is truly infectious. This album has a lot of emotion embedded in its grooves, and its fully evident on these heartfelt songs.  Do yourself a favor and pick up a copy of this marvelous record. To find out more about Nick Piunti & The Complicated Men, please check out: www.jemrecordings.com or www.nickpiunti.com.